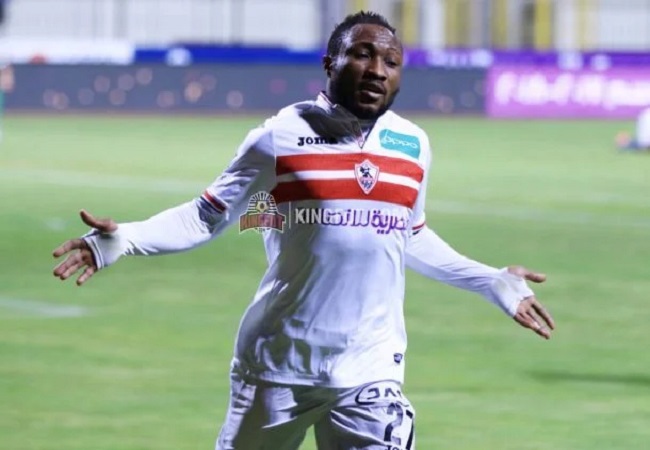 Ghanaian striker Benjamin Acheampong has been in financial battle with his former club Zamalek. And FIFA have given Egyptian powerhouse Zamalek a 30-day ultimatum in order for them to pay the player.

After one successful season with El-Dakhleya, Acheampong earned himself a move to Zamalek. However, his time with the Whites was forgettable appearing in only six games scoring two goals. He then spent a short loan at Petrojet, before seeing his contract terminated.

Following his departure, the striker filed a complaint against the White Castle to CAS. He claims that he had had several outstanding salary payments. And the court eventually ruled in his favor.

The Egyptian Professional Committee received the letter of the decision from FIFA and the Professional Footballers Association of Ghana (PFAG). Document citing Zamalek are obliged to pay the 30-year-old striker $1.150M, in addition to paying part of the legal fees.

The club claims that Acheampong signed a settlement agreement. But CAS seem to believe it was invalid as the player signed it under “straitened circumstances”.

The club claims that Acheampong signed a settlement agreement. But CAS seem to believe it was invalid as the player signed it under “straitened circumstances”.

To make matters worse, the Egyptian club failed to show up for the hearing, making an excuse of ‘the person managing the club’s email address had left.’

After receiving CAS’ decision, FIFA have announced in an official statement that Zamalek are obliged to pay Acheampong or else they might suffer a transfer ban.

“Zamalek Sports Club is granted a final deadline of 30 days as from notification of the present decision in which to settle said amount.” FIFA’s Disciplinary Department wrote.

“Upon expiry of the aforementioned final deadline and in the event of persistent default or failure to comply in full with the decision within the period stipulated, a transfer ban will be pronounced until the complete amount due is paid.” They concluded.