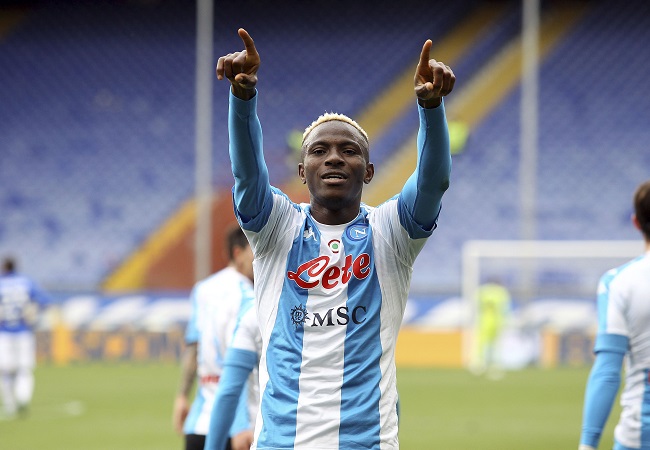 Napoli thrashed Lazio 5-2 in their Serie A encounter at the Diego Armando Maradona Stadium on Thursday. Opportunity for Victor Osimhen to score his third goal in five league games and his sixth in 19 league matches.

After a slow start due to injuries and coronavirus, Osimhen is now showing the form that made Napoli paid a club and African record fee for his services. The Nigerian international now has four goals contributions in his last five league games for Gli Azzurri.

Napoli got off to a perfect start on Thursday night when Lorenzo Insigne put them ahead from the penalty spot in the sixth minute.

Matteo Politano then made it 2-0 six minutes, firing a low shot past Pepe Reina in Lazio’s goal. Insigne’s second of the game in the 53rd minute made it three for Gennaro Gattuso’s men before Dries Mertens scored a beauty to give the home side a four-goal lead.

Lazio gave themselves little hope of a comeback after Ciro Immobile and Sergej Milinkovic-Savic strikes halved the deficit.

But Osimhen, who came on in the 74th minute, killed all hopes of a potential comeback as he scored Napoli’s fifth in the 80th minute.