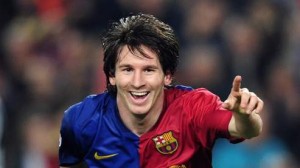 Lionel Messi was born on 24 June 1987. He is an Argentine footballer who currently plays for Liga team Barcelona and Argentina national team.
Career: