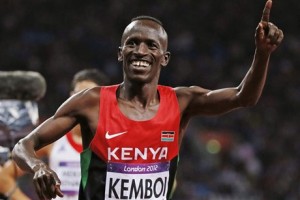 Ezekiel Kemboi is one of only three men to have won both Olympic and World golds in the 3 000m steeplechase, along with Reuben Kosgei and Brimin Kipruto. He only took up athletics after he finished school in 1999, but still won the African Junior Championships in 2001 despite taking a tumble.

Kemboi went on to finish second behind compatriot Stephen Cherono at the Commonwealth Games the next year, before beating Cherono (now racing for Qatar) in an epic duel at the World Championships the next year. In 2004 he won gold at the Athens Olympics ahead of fellow Kenyans Brimin Kipruto and Paul Kipsiele Koech.

-2002: 2nd in the Commonwealth Manchester Games

-2005: 2nd in the Helsinki World championship

-2006: 1st in the Melbourne Commonwealth games

-2010: 2nd in the African championships of Nairobi