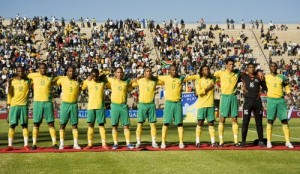 At three weeks to the competition, South Africa announced on Sunday its final list of 23 players. Coach Gordon Igesund trusted several players from the local league (PSL). The strikers Katlego Mphela and Bernard Perker are not on the fringe of the list.

However, Igesund has had to go to the winning the African title without Benni McCarthy, Eric Mathoho and Ayanda Patosi. Just as with the failure of his quest for reinforcements with binationals as Sturman or the return to the national team of Steven Pienaar.

South Africa has not played any major competition since the 2010 World Cup and missed the last two Afcons.  On 19 January 2013, the Bafana Bafana will open the ball of the continental mass against Cape Verde.