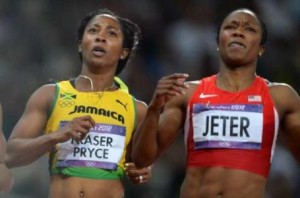 Shelly-Ann Fraser-Pryce and Carmelita Jeter, two of the stars of last summer’s Olympic Games, will renew their rivalry when they race over 60m at the British Athletics Grand Prix this Saturday at the NIA.

Jamaican Fraser-Pryce will compete in her first ever indoor race when she lines up against Jeter, who will return to the UK after a second place finish at the British Athletics Glasgow International Match last month.

“Birmingham has been good to me in the past and it was great to run there a few weeks after the Olympics and I’m really looking forward to running there again this weekend.”

“It will be my first taste of racing indoors and I’m really excited about competing in front of a British crowd again and seeing what I can do over 60m. I have a good start in most of my races so hopefully that will help me competing over a shorter distance.” 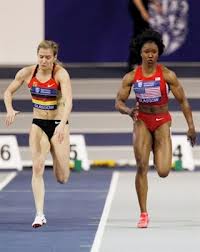 Jeter meanwhile, was beaten in Glasgow by Germany’s Verena Sailer in Glasgow last month, and is anticipating another tough race when she lines up in the blocks at the NIA this weekend.

“It’s always a great race when Shelly-Ann and I compete against each other and I’m sure the visiting fans will see another close one in Birmingham. We always seem to bring the best out of each other and I’m looking forward to facing her again and running in front of the passionate British crowd.”

“2013 is another important year for me so I would like to perform well indoors, to set me up for the outdoor season and the World Championships in Moscow later on this year. I’m defending champion and I really just want to make sure I’m ready for August.”

Ivory Coast’s Murielle Ahoure will provide formidable competition for Fraser-Pryce and Jeter after running a world leading 7.00 in Houston last month, while Britain’s new UK Champion Asha Philip (coach: Christine Bowmaker) will be looking to continue the form that has seen her rise to sixth in the indoor rankings for 2013.