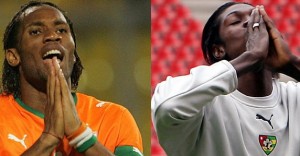 Both players, stars in their club were absent from their selection from the third day of the 2014 Brazil World Cup.

Both thirties, Adebayor and Drogba have repeatedly raised their audience with their performance during a game of their national team. They managed to qualify for the first time in the history of their country for the 2006 World Cup.

The two players who have almost the same routes have sometimes divergent points.

Didier Drogba delayed his international retirement. The former Marseille player announced that he would leave the team after the 2012 Afcon.  A decision that he finally cleared to participate in the 2013 edition, sometimes at the urging of supporters. Currently, he was involuntarily dismissed by Lamouchi. In the absence of the player of Galatasaray, Ivory Coast continues to win, better get his qualification for the third and final round of the 2014 Brazil World Cup. Would his presence have changed something at the performance of the Elephants? However, the French coach plans to call him when will be fit.

Adebayor with the Hawks

In harmony with his teammates of the selection, Emmanuel Adebayor Sheyi always has problems with the coach Didier Six.

The two Togolese football players had clashed during the African Cup of Nations. The atmosphere is tensed. His decision to return to selection will not be in the presence of French technician.

Emmanuel Adebayor has been absent for the last three official matches of the Hawks, the double confrontation against Cameroon and the match against Libya. Without him, Togo gained only 3 points with a 2-0 win at Kégué in Lome against the Indomitable Lions.

Consequence: the Hawks said farewell ‘to the Brazil World Cup. Could his presence make a difference? Between Adebayor and Six, who must remain with the selection?