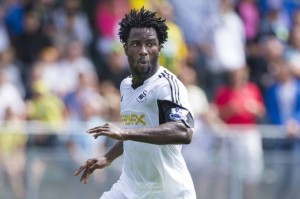 Weekly Review of African performance of the weekend in Europe. England and Spain have taken again their leagues, like France and Germany last week. Note the first goal in Lorient of Vincent Abubakar and the thunderous debut of the Congolese Cedric Mabwati in the Liga.

It is without Emmanuel Adebayor and Benoit Assou-Ekotto that Tottenham recorded its first win of the season. The Togolese and the Cameroonian announced on departure have not participated in the narrow victory of the Spurs 1-0 at Crystal Palace. A match that saw the Eagles’ tenure of the South African Digkacoi and the first minutes of the Moroccan Marouane Chamakh.

Wilfried Bony did not miss his debut in England. Playing his first match, the Ivorian has found the net but his Swansea team heavily lost against Manchester United 1-4. 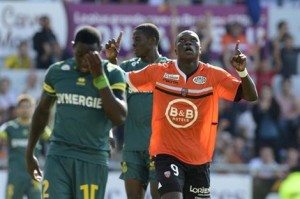 After the initial draw against Evian, Lorient welcomed home Sunday Nantes (2-1). The opportunity for Vincent Abubakar, arrived this summer from Valenciennes to open his counter of goals. It is the Cameroonians who equalized for the Hake before the winning goal by Jérémy Aliadiere.

Top scorer of the Girondins last season Sheikh Diabate resumed his good habits. In a tough match against Toulouse this weekend, the Malian opened the scoring for Bordeaux. But Violets got back to the score thanks to Ben Basat for a score of 1-1.

First goal of the season for Adama Ba. The Mauritanian shone with Bastia against Valenciennes (2-0). Entering at 15 minutes to the end, the former striker of Brest deflected a shot from Sambou Yatabaré in the nets of the Penneteau. The Malian already author of an assist by Gianni Bruno for the Corsican first goal. 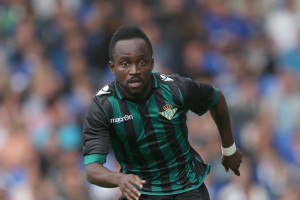 “Mr Penalty” has struck again this weekend. Ryad Boudebouz converted his eleventh kick repair League against Lyon Friday. But the Algerian could not prevent the defeat of Sochaux 1-3 against the Gones who can say thank you to the Franco-Algerian Yacine Benzia author of a goal and an assist.

Cedric Mabwati regaled Sunday the supporters of Betis Sevilla in La Liga. Opposed to the ogre Real Madrid (2-1), the Andalusian club has certainly lost but caused major problems for the reconstitution of Carlo Ancelotti. Mabwati has sickened for 65 minutes the Merengues defenders with the opening goal in Molina. The Algeria Karim Benzema equalized before the winning goal of Isco.

Only African scorers in the victory Granada 2-1 over Osasuna. It is the Moroccan Youssef El Arabi who opened the scoring before seeing the Algerian Hassan Yebda worse it.

Pierre-Emerick Aubameyang has not scored this weekend but Dortmund is leading Bundelsiga with a 2-1 victory over the promoted Eintracht Braunschweig. The Gabonese was tenured and has been replaced in the 75th minute.

He is in shaped in this season. Sami Allagui scored again this weekend with Hertha Berlin against Nuremberg (2-2). While his team was being led, the Tunisian striker equalized. This is his third goal of the season after his double in the opening.

Juventus has won the Super Cup by defeating Lazio 4-0. It is the Franco-Guinean Paul Pogba by entry in the first half that opened the scoring for the Bianconeri before goals from Chiellini, Liechteiner and Tevez. Ghana’s Kwadwo Asamoah has also played.