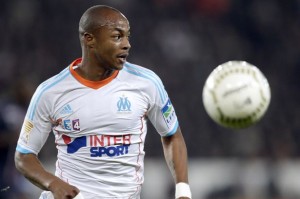 Black Stars and Olympique Marseille winger Andre Dede Ayew has insisted that his side is not struggling to find the net and that is why they are dropping on the league table. Asked about Marseille’s barren run of form, Ayew insisted that Elie Baup’s side ”are far from being on the brink of a crisis, very far”.
“We are confident, we know that the goals will come. We’ve scored in every match except for (Saturday),” said Andre Ayew, the elder of the two Ayew brothers in the Marseille team. Beaten 2-1 by Arsenal in the Champions League last week, with just a stoppage-time penalty from Jordan Ayew to show for, Marseille were then held to a goalless draw at Bastia over the weekend.
“We can be more decisive but you have to know that sometimes in a match, if you can’t win, you also have to know not to lose,” continued Ayew. “Against Bastia, we felt it would be difficult to score. We were able to manage the difficult moments, something we weren’t able to do against Arsenal.” Ayew promised that Marseille would “do everything to win” when they host Saint-Etienne at the Velodrome on Tuesday. “Points at home are especially important. The defeat against Monaco (three weeks ago) hurt us.”
Andre Ayew netted the decisive goal in the corresponding fixture last season as Marseille won 1-0.