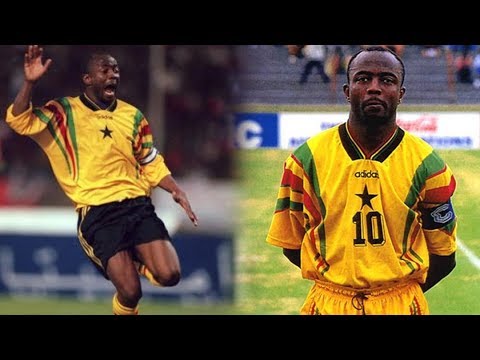 The former Ghanaian international, Sarfo Gyamfi known in football circles as the ‘Black President’ has revealed that the entire Black Stars squad thought Abedi Pele influenced the change in captaincy in the 1992 AFCON final against Ivory Coast.

Ghan lost the hope of winning their 5th African Cup of Nations after being defeated 11-10 on penalties against Ivory Coast in Senegal.

Before the final, captain Abedi Pele was suspended for the match against Ivory Coast. And Tony Yeboah, who was assistant, was supposed to lead the team in the field.

But, a last-minute decision from coach Otto Pfister supprised everybody with Anthony Baffoe, who has not been with the team for long, leading the team on the day. This generated a heated argument in the country.

Tony Yeboah recently declared that he was shocked and angry that he didn’t captain the Black Stars for the 1992 Africa Cup of Nations final in Senegal.

However, Sarfo Gyamfi, in an interview with Don Summer of Angel FM in Kumasi, sharing his thought on the issue said that, the entire team thought Abedi Pele was the rationale behind the captaincy change that jeopardized the country in the final.

“In fact the entire players thought Abedi had influenced authorities to strip Tony Yeboah of the captaincy because he was in the same room with Tony Baffoe and did everything at camp with Tony Baffoe” he revealed.