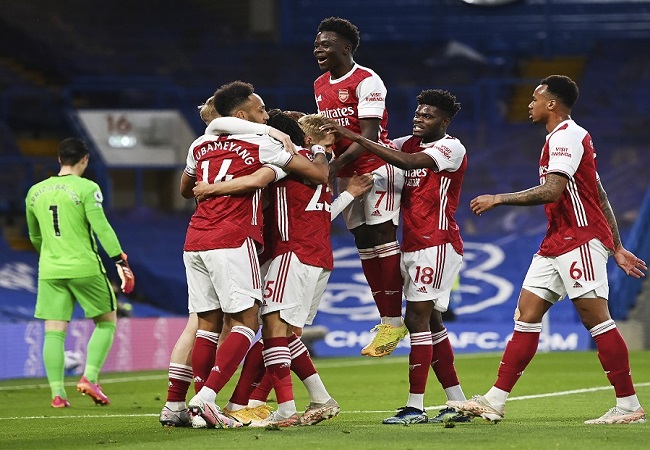 Arsenal registered their third consecutive away clean sheet by beating Chelsea 1-0 at Stamford Bridge on Wednesday. The Gunners thus keep alive their slim hopes of top-seven finish in the Premier League with two matches to go.

Arsenal netted the game-winning goal in bizarre circumstances as Emile Smith-Rowe tapped in following an error by Jorginho, whose back-pass was saved by Kepa Arrizabalaga, only for Pierre-Emerick Aubameyang to pounce on the rebound and set up the young attacking midfielder.

Arsenal legend Nwankwo Kanu was delighted to see the Emirates Stadium outfit claim a win which sees them remain in the hunt for European football next season.

The retired Nigeria international has fond memories of the fixture, having displayed his goalscoring prowess by netting a hat-trick against Chelsea on October 23, 1999.

“It’s always a good day when Arsenal beats Chelsea. Well done Gunners“. The former Arsenal number 25 said taking to Twitter after Wednesday’s game. The 1996 Olympics gold medalist, Kanu was in the Arsenal side that beat Chelsea to win the 2002 FA Cup.