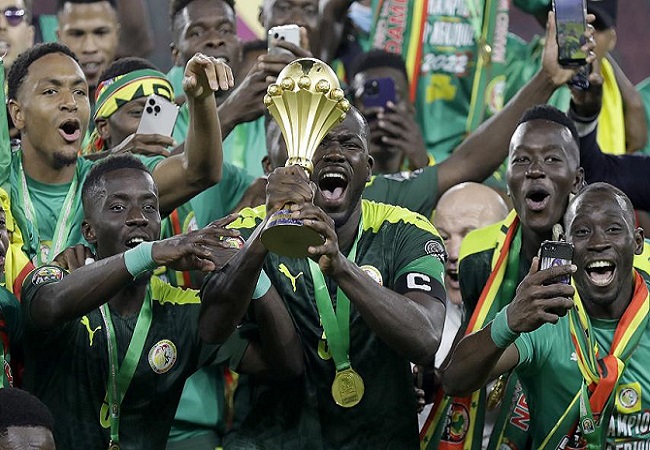 Senegal continue their ascent into the upper echelons of world football after winning their first ever CAF Africa Cup of Nations (AFCON) title on Sunday. The new champions of Africa, the Lions of Teranga have climbed to 18th in this February’s edition of the FIFA/Coca-Cola World Ranking, their highest ever position. Unsurprisingly, the Cup of Nations generated most the movement seen in the year’s first edition of the Ranking.

That said, there was action beyond the borders of the Mother Continent, most notably in the shape of qualifying for the FIFA World Cup Qatar 2022™, with the results even affecting the Top 5 places. Argentina (4th, + 1) used the international window to take fourth place from England (5th, – 1), following impressive results in the South American qualifiers. Belgium (1, unchanged) remain in pole position ahead of Brazil (2, unchanged) and France (3, unchanged).

Aside from Senegal, the highest ranked African nation in the standings, Cameroon (38, + 12), who finished third at the African Cup. And runners-up Egypt (34, + 11) have made the most significant moves within the TOP 50. Other notable movers were Canada (33, + 7) – a new high for the Canucks – and Costa Rica (42, + 7), with both enjoying strong performances during Qatar 2022 qualifiers in the CONCACAF zone.

However, the biggest jump of all this month was by Gambia (125, + 25), the Scorpions ascending 25 places courtesy of their run to the quarter-finals at the African Cup. Equatorial Guinea, who also reached the last eight at the tournament, climb 15 places and are now in the Top 100.

With eight of its teams now in the Top 50 (up 1 this edition), CAF has consolidated its third place in terms of confederation ranking, to the detriment of the AFC (4 teams in the Top 50, a fall of 1). The other confederations have the same number of representatives as in the December 2021 Ranking: 26 for UEFA, 8 for CONMEBOL, 4 for CONCACAF and none for OFC.

The next FIFA/Coca-Cola World Ranking will be published on 31 March 2022.