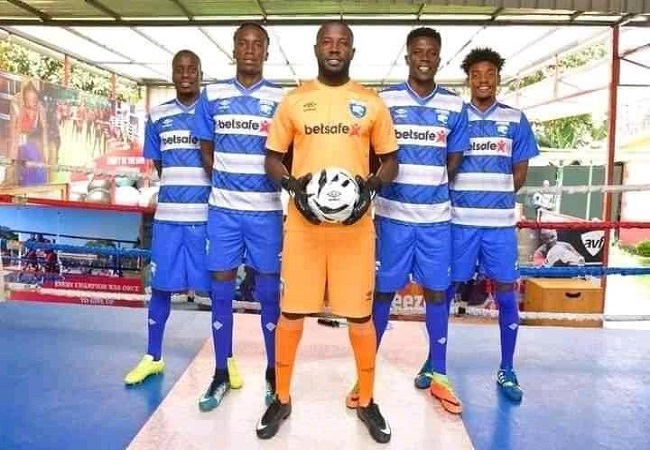 Kenyan Premier League (KPL) heavyweights AFC Leopards have unveiled their 2020/21 season home kit. The jersey has been designed to accommodate their new sponsors Betsafe. And the traditional blue and white colours have been prominently maintained.

The KPL club is the first to unveil the new kits although they have not confirmed any new signing so far. AFC Leopards recently opened a merchandise shop in the Nairobi city center. Fans are expected to purchase the kits from this very shop.

The shops are expected to be another source of revenue for AFC Leopards who have had to depend on well-wishers, members and fundraisers to offset debts and pay bills and players.

“The fans, I know, have also been waiting to see the new kits. And the good news is that we have them now and soon will be retailing at our shops. It is a quality material which the club hopes will impress our supporters.”

After unveiling the kits, eyes will now be on who the 13-time KPL winners will sign. Especially after their Mashemeji rivals Gor Mahia have acquired more than 10 new players. “We know our fans have been anxious to know who we are going to sign. But let them remain patient as they have been. Because we have decided to do things in a very bureaucratic and professional manner.”