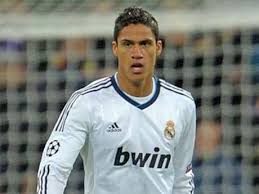 Raphaël Varane born April 25, 1993, is a French footballer, from Martinique island, who plays for the Spanish club Real Madrid in La Liga. He primarily plays as a central defender and a defensive midfielder often acting as a sweeper in the latter role. Varane is a young French international having earned caps at under-18 and under-21 level. He previously played for the French club Lens and, ahead of the 2010–2011 season, began training with the senior team and appeared on the bench in several league matches. On November7, 2010, Varane made his professional debut in a league match against Montpellier. Varane has been described by Lens coach Eric Assadourian as a “truly first class player” who is “comfortable on both the tactical and technical level”
Early career

Varane was born in the city of Lille in the Nord-Pas-de-Calais region. His father is originally from Le Morne-Rouge (Martinique), while his mother was raised in Saint-Amand-les-Eaux. Varane began his football career in the Arrondissement of Lille playing for local club AS Hellemmes at the age of seven. After spending two years at the club, in July 2002, he joined professional club RC Lens, despite some interest from Derby du Nord rivals and hometown club Lille OSC. Similar to the development of the club’s previous prized assets such as Gaël Kakuta and Timothée Kolodziejczak, Varane spent time at “Centre de Préformation de Football” a training center exclusively for players brought up in the Nord-Pas-de-Calais region, nearby Liévin. He spent two years at the center training during the weekdays and playing with Lens on the weekends.

After returning full-time to Lens, Varane quickly ascended up the club’s youth ranks. In the 2008–2009 seasons, alongside teammates Thorgan Hazard and Geoffrey Kondogbia, he played in the club’s under-16 team that won the “Championnat National des 16 ans”. In the following season, Varane was promoted to the club’s under-19 team, despite being two years younger than several of his teammates. Ahead of the 2010–2011 seasons, Varane signed his first professional contract. He was, subsequently, promoted to the club’s reserve team in the “Championnat de France amateur . Varane made his amateur debut in the club’s opening league match of the campaign in a 2–0 victory over Drancy. He appeared as a starter in the club’s next nine matches with the team losing only one of them.
International career
Prior to playing for the under-18 team, he was called up to the under-17 team, but did not make an appearance. Varane made his 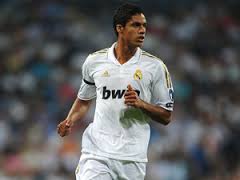 debut with the under-18 team on August 24, 2010 in a friendly match against Denmark. On his debut, he scored the final goal in a 2–0 victory. Varane turned down subsequent call-ups to the under-18 team because of his increased participation with the Lens first team and, as a result, missed the “Tournoi de Limoges” and a tournament in Israel. On 3 February 2011, he was called up to the under-21 team by the coach Erick Mombaerts for the first time for a friendly match against Slovakia. Varane described the call up as “a huge surprise”. He earned his first under-21 cap and starts in the match against Slovakia playing the entire match which ended in a 3–1 win. On 15 November, Varane scored his first under-21 goal in a 2–0 at the 2013 Euro U-21, a qualifying win over Slovakia. In August 2012, Varane was called to the France national team squad for a friendly, but was an unused substitute.