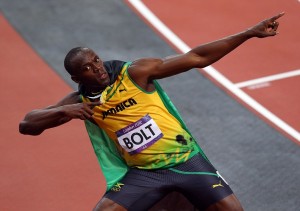 Usain Bolt was born in Jamaica on August 21, 1986. Both a standout cricket player and a sprinter early on, Bolt’s natural speed was noticed by coaches at school, and he began to focus solely on sprinting under the tutelage of Pablo McNeil, a former Olympic sprint athlete. As early as age 14, Bolt was wowing fans of sprinting with his lightning speed, and he won his first high school championships medal in 2001, taking the silver in the 200-meter race.

At the age of 15, Bolt took his first shot at success on the world stage at the 2002 World Junior Championships in Kingston, Jamaica, where he won the 200-meter dash, making him the youngest world-junior gold medalist ever. Bolt’s feats impressed the athletics world, and he received the International Association of Athletics Foundation’s Rising Star Award that year and soon was given the apt nickname “Lightning Bolt.” 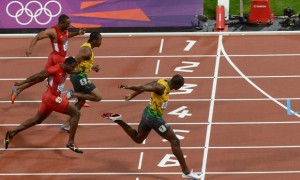 Despite a nagging hamstring injury, Bolt was chosen for the Jamaican Olympic squad for the 2004 Athens Olympics. He was eliminated in the first round of the 200-meter, though, again hampered by injury.

Bolt announced that he would run the 100-meter and 200-meter events at the Beijing Summer Olympics. In the 100-meter final, Bolt broke the world record, winning in 9.69 seconds. Not only was the record set without a favorable wind, but he also visibly slowed down to celebrate before he finished (and his shoelace was untied), an act that aroused much controversy later on.