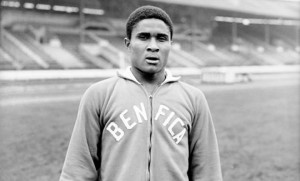 Portuguese and world football is in mourning. The Portuguese striker Eusebio passed away on Sunday, after suffering a cardiac arrest. He was 71 years old. He had received the Ballon d’Or in 1965.

He had been hospitalized several times for various health problems including a stroke (CVA).

He was born in Mozambique, then a Portuguese colony.

He won therin the Champions Cup in 1962 against Real Madrid of Di Stefano, 11 league titles and four cups of Portugal.

With the Portuguese national team, he reached the third place in the 1966 World Cup, after which he finished top scorer of the edition with nine goals.

The emotion is strong throughout the world today.