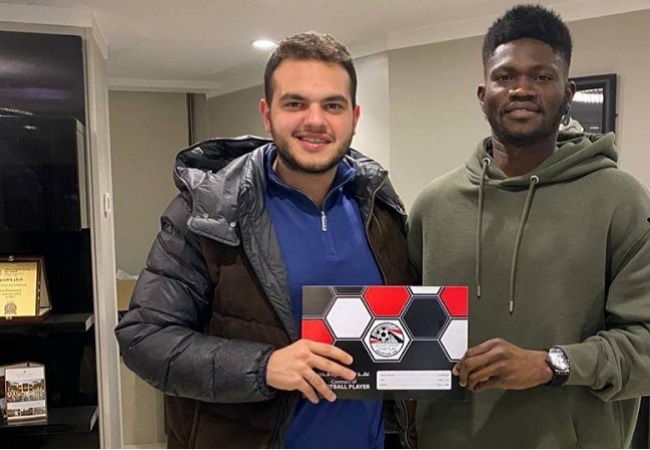 Ghanaian midfielder Kwame Bonsu will start a new challenge. He has completed his move to Egyptian Premier League side Ceramica Cleopatra on a permanent deal.

Ceramica Cleopatra will play their first-ever season in Egypt’s top division. And they have added a number of high caliber to their ranks. They are in the name of Mohamed Ibrahim, Mido Gaber, Fonsinho, Saleh Gomaa and Ragab Bakar

They have now added experienced midfielder Kwame Bonsu to their ranks. He who is expected to remain at the club until 2022. Tunisian news outlet, Foot24, had previously announced that the agreed fee was around $250 000.

The 26-year-old started his professional career in his home country of Ghana back in 2014 with Heart of Lions Kpando.

He then secured a move to Europe with Swedish side FC Rosengard. And he went on to move around the country where he plied his trade with Mjallby AIF and Gefle IF.

Then after a full season without a club, he returned to his home country with two-time African champions Asante Kotoko in 2018.

His one year away from football came after Bonsu was in jail in Sweden. This was after being accused of raping and assaulting his wife at the time, therefore spending some time in prison.

After spending another two years with the Ghanaian powerhouse, he moved to Tunisia’s Esperance Sportive de Tunis.

During his time in the Tunisian capital, Bonsu has made 29 appearances. And He managed to win the domestic treble (Tunisian League, Tunisian Cup and Tunisian Super Cup).

In what was his first and only season of senior professional football, the centre-back made 31 league appearances. This includes 30 starts and one goal for the White and Violets.

His injury and fitness situations have prolonged his anticipated debut for Ghana. They who will be looking to call on him when the 2022 AFCON qualifiers resume in March next year.